Yesterday was Rob’s birthday, and since we had such a great meal the last time we went, we decided to head to John Harvard’s again for their Wednesday evening “Brewer’s Prix Fixe” dinner. This month’s featured item was lamb, and the menu looked good. My sister and her boyfriend joined us, and we all did the menu with beer pairings. (John Harvard’s brews all their own beer, and it’s delicious, but if you don’t care for beer you can do the menu without the pairings.)

First up, a lamb skewer with a chickpea and arugula salad, atop a grilled flat bread. It was a very substantial appetizer, and quite tasty, though I think the lamb could have been cooked a bit less. It was not dry at all – it had been marinated in ale with lots of garlic  – but it was cooked through. The bread sopped up the juices from the lamb, so that became quite savory. The beer pairing was Epilogue-A Sour Ale, which was absolutely delicious (I love sour ales), and everyone at our table agreed it was a nice start. 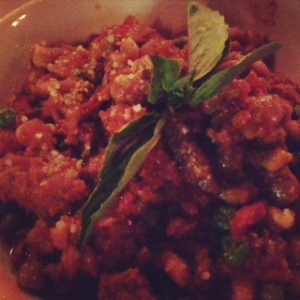 The second course was my favorite, mostly because I love a good pasta & sauce: lamb and English pea ragu over porcini spaetle. YUM. This was absolutely delicious, and again quite a generous portion. The paired beer was the Good Hope I.P.A., and although I’m not a huge fan of I.P.A.s generally, this pairing really worked. Somehow the dish really softened the bitterness for me, so I enjoyed it. 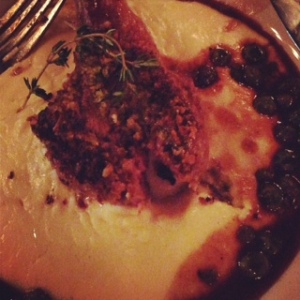 The main course was a roasted, basil-crusted lamb chop atop a bed of truffle polenta, and although the menu said it came with fava beans, it was actually served with peas. Not a problem as they were really fresh and crisp. There was a nice au jus around the plate, too. The crust on the chop was delicious, and the meat was perfectly cooked and very tender. Another substitution for this dish was the beer pairing: instead of the Balrog Black I.P.A. listed on the menu, the waiter explained they were subbing with Redhead – a red ale with a slight ginger finish. Although I’m not sure it was a better pairing than the I.P.A. would have been, was a really good beer.

The final, dessert course was a trio of chocolate mousse: white, milk, and dark. Being a dark chocolate fan, I went right for that one, and noticed it didn’t seem as dark as Rob’s. It was good, but a taste comparison with his made me suspect they mixed milk & dark together (accidentally? or perhaps they were running low) on my plate. Each small glass of mousse had a sweet cookie stick. The beer pairing was quite interesting – a bourbon barrel aged imperial stout, that was strong, uncarbonated, and very much like a port.

Overall, quite good meal once again, and I still think it’s a bargain for $30. Can’t wait to see what’s on the April menu…