Since we started planning our trip to India later this year, our thoughts have turned frequently to our visit to Morocco in 2009. Prior to that trip we had only been to western Europe. As foreign as Paris can seem when trying to order lunch from a stoic French waiter, it’s nothing compared to getting off the plane on the tarmac at Marrakech Menara airport and instantly being overwhelmed by the scent of spices in the air, and having your passport stamped in Arabic for the first time.

Morocco was challenging, enlightening, and ultimately one of the most rewarding places we’ve ever visited. Truthfully, it’s what has made us crave something more each year than croissants and pubs. (Though croissants and pubs are awesome.)

No amount of reading and travel-show watching really prepares you to step into another culture. We spent much more time in the medina – the old, walled city – than the Gueliz, the new part of the city, which is quite cosmopolitan, with grand avenues, glittering western chain hotels, and high-end boutiques. Perhaps our impression of Marrakech is lopsided for that, but it’s no less real. Wandering through the souks, exploring alleyways, watching people buy fruit, herbs, nuts, listening to the sounds of a world so different from your own are really intoxicating. Although we undoubtedly took a few missteps, it was a fantastic experience, and I had tears in my eyes as the plane rose up over the rose city to take us home. We know we will go back someday.

Here are some of the places we enjoyed most during our five days: 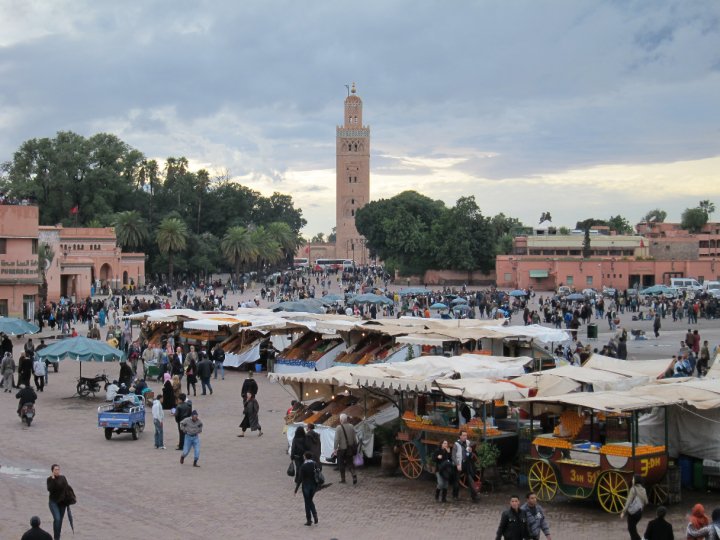 We would also recommend the riad we stayed in – Riad Lorsya – a small riad with only four rooms. We stayed in the Rose Room, which was lovely. Breakfast was fantastic and hearty, with traditional breads, yogurt, fruit, and freshly squeezed juice served in the central courtyard every day. The house manager was extremely helpful and accommodating, and arranged a private car and driver to take us to Essaouira for a day.

One thought on “From the Rose City to the Pink City”