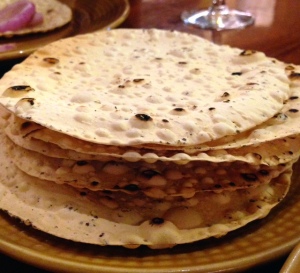 We’ve been back just a week, and are still trying to get back into the swing of work and regular life. As we both had to start back at work almost immediately, there has been little time to really reflect on what was the most adventurous and momentous trip of our lives to date, let alone sort through the hundreds of photos to come up with a coherent narrative of all we saw and experienced

However, one thing we can jump right into, is the delicious food we had. Perhaps we set the bar high, but we wanted–were expecting–to be blown away by the food. On a trip of 18 days, it’s impossible to think that every meal is going to astound you, but a surprising number did. From a $5 dinner for two, to a kati roll on the street for less than a buck, to a multi-course Nepali set meal that cost less than a good pizza in Boston. Yes, we did a real splurge meal once (see below), but overall we ate very, very well for very little money. And, we had nothing that was bad, nothing we wouldn’t happily eat again. But while some meals were just very good meals, or nice meals, a few will stay in our memory for a very long time:

Bukhara, New Delhi – To thank our hosts in our first city, we found a restaurant that had been highly recommended in a few sources, and Richard and Kirsty confirmed this was a great place to dine. (Both Presidents Clinton and Obama have dined here; you guessed it, this was the splurge.) Located in a posh international hotel, Bukhara’s menu is focussed mainly around items marinated in yogurt and spices, and cooked in the tandoor oven. Brought to the table first are warm pappadums, a platter of raw onions, and a mint and cilantro sauce. We then ordered a selection of dishes to share: tender white chicken pieces, a whole lamb leg, and huge, succulent shrimp. A bowl of the most delicious daal I’ve ever had, and a couple of platters of butter and plain naan rounded out the meal. This was a fantastic experience, we had an amazing time with Richard and Kirsty, and we all left quite satisfied. If you’re ever in Delhi, seek this place out.

United Coffee House, New Delhi – An odd name for what turned out to be a hidden gem of a restaurant, located in Connaught Place. We hit upon it after a long morning of sightseeing, having taken a cycle rickshaw tour of Old Delhi, including the fantastic spice market, and then a long stroll around Jantar Mantar, a collection of large-scale architectural astronomical instruments. We needed a break and some sustenance before continuing on to Humayun’s Tomb. Connaught Place is a large, modern area full of mid- to upscale shops, and the vibe there is very laid back, with lots of young people window shopping and socializing. As we were looking for something more relaxing than the takeaway tandoor sandwich or pizza, we came across this unassuming place. Not being able to see inside, we perused the menu on the stand outside and decided it was worth a try. And was it ever.We were two of the o nly tourists in there, and it was quite crowded within a few minutes of our arrival (both good signs).

And the dishes we ordered were sublime: a chicken biryani that was unlike any biryani I’ve had here in the states, each spice standing out in a way that made this a dish I will remember forever; and Kadai Paneer, something we had never seen before but turned out to be a favorite dish of the entire trip: cubes of paneer (cheese) in a chili-pepper laden sauce.  Oh, and of course, garlic naan. I think I went back for a third helping of the biryani, I literally could not. stop. eating it. (Also, apparently I was so busy eating I neglected to take a single picture…but trust me on how good this food was.)

Moti Mahal, Jaipur – Another city, another day of sightseeing and a much needed, very late lunch stop. We had heard of Moti Mahal when doing our research, and I’m not embarrassed to say it was on Gordon Ramsay’s Great Escape. Though he went to what appeared to be the flagship restaurant in Delhi, we discovered this one in Jaipur, and it fit the bill on this particular day for convenience and selection.

We ordered their most famous dish, butter chicken, as well as a vegetable biryani, and chili naan. The biryani was excellent, though could not quite compete with the sublime version at United Coffee House. However, the butter chicken lived up to its reputation and we ate every bit. The chili naan was so, so flavorful, and I think I may be a convert to this from my usual garlic naan.

Kusum Roll, Kolkata – In preparation for the trip, we had both read and watched many videos. One great source for food information turned out to be Mark Wiens’ videos on YouTube. If you’ve never checked him out, do – he really knows his stuff when it comes to food, not just in India but in much of Southeast Asia. In one video he makes a compelling case for the kati roll, a specialty in Kolkata. Essentially street food, a kati roll is a paratha (unleavened flat bread) fried on a griddle (with or without an egg) and filled with meat, onions, chilis and an optional mustard sauce; variations abound. In his video on the subject, Wiens recommends Kusum Roll as the place to get the best version of a kati roll, and he did not steer us wrong. 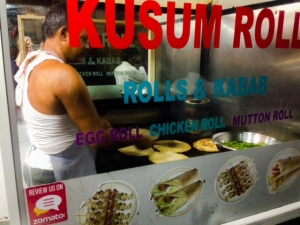 It’s a walkup window/counter down a small alleyway off of a main street. We ordered the “egg chicken roll”, which was fried in one egg, and filled with chicken and red onions and then the deliciously spicy mustard sauce. Rolled up in wax paper and handed over, you stand in the alley with everyone else, tilting your head, leaning over and trying not to let any of the sauce drip down your wrist as you bite into a delicious, greasy, eggy, spicy, chicken rollup sandwich that would satisfy any craving. We shared one (it was plenty for a snack, and given its rich nature we didn’t want to push our luck), for about fifty cents.

Thamel House, Kathmandu – Being home to many backpackers of all nationalities as they transit through on their way to a trek or other adventure, Kathmandu has more than it’s share of multi-cuisine restaurants. While we were there, we had a burger, and a wood-fired pizza, both really excellent. But of course, we wanted Nepali food as well. So, we opted for a traditional multi-course meal one of the nights, and found a place right in Thamel that we could walk to. Thamel House was lovely, and the food was fantastic. Eleven courses sounds like a lot until you realize the first few are very small appetizers, and then the “main” dishes are scoops of food served around a central plate of rice. There was plenty to eat–more than we could finish, really–but we never felt overwhelmed, and it was all delicious. They offer a “veg” or “non-veg” version of the menu, so we each got one to see the differences. Dessert was a lovely yogurt custard. There was entertainment on a stage downstairs (we sat on the second floor, and had a view of the first) in the form of women doing a traditional dance, but it was not obtrusive in any way. Though this place had been listed as “expensive”, our entire meal, including a bottle of wine, was under $40. 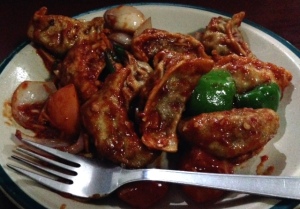 Yangling Tibetan Restaurant, Kathmandu – A completely unpretentious place, and a bit off the radar (or maybe not…people were vying for tables when we left), we did find this through a quick search on TripAdvisor our last night when we were determined to get one more momo fix. We were not steered wrong – this place is a total win. Not at all fancy, but just plain good. A platter of buffalo momos tossed in a chili sauce, and a large dish of veg fried rice, and a large Nepal ice beer (split between us), came to $5.70. Now that’s good eating!

Those were not all of our great meals, of course, but a few of the standouts. We had many other delightful dishes, over breakfast, lunch and dinner that added to the enjoyment of our Indian and Nepali adventure.

More to come on the sights soon!