“Lake Como, it seems to me, touches on the limit of permissibly picturesque,
but Atitlán is Como with additional embellishments of several immense volcanoes.
It really is too much of a good thing.”
–Aldous Huxley

Our departure from Flores was less eventful than our arrival, with no travel hiccups (well, save the fact that we got to the airport MUCH earlier than necessary, so waited in an empty terminal until the ticket desk actually opened).

After a one-hour flight over beautiful, mountainous scenery, we landed back in Guatemala City, and easily found our ride; we had made transportation arrangements with the lodge we would be staying at on Lake Atitlán. This lodge was actually what prompted the entire trip to Guatemala (which we talk about in more detail here): an eco-lodge nestled on a steep slope near Santa Cruz on the edge of the lake, accessible only by boat.

Arrival at the lodge; excursion to Santiago

Our driver took us to Panajachel, known to many as “Gringotenango”, a nickname indicative of its tourist-heavy population and atmosphere, an easy landing spot for backpackers traveling through Guatemala looking for cheap sleeps, food, and trinkets. Although Pana (as the locals call it) has a certain hippy charm, you need to seek out the villages circling the lake to get the real feel for the area. Some are larger, some tiny, but the further you go from Pana, the more you will see of the real Guatemala.

Our transfer to the lodge was by lancha, the small shallow boats used by everyone to get around. There were public lanchas, which are very inexpensive, but for this first trip across the lake the lodge picked us up in their own. Our first view of Laguna Lodge was as beautiful as we had been expecting. This would be our home for five nights. 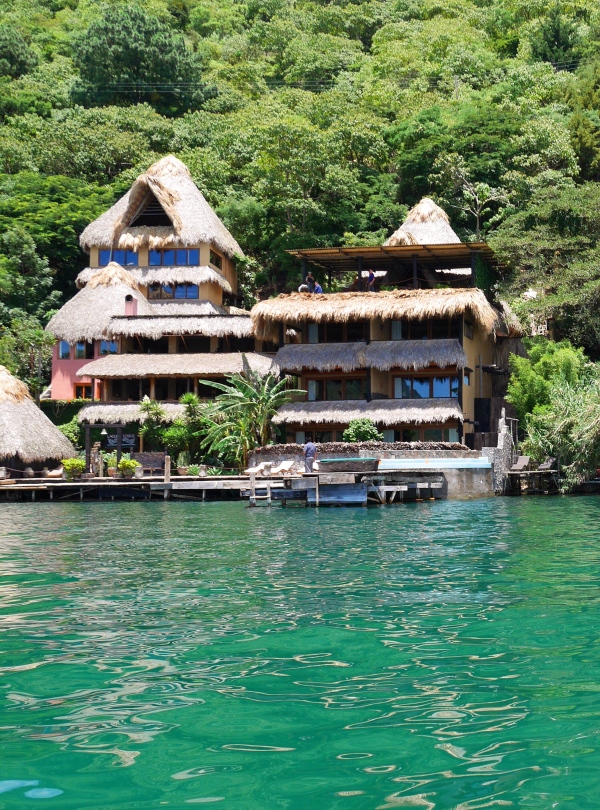 Our first afternoon and evening were spent relaxing and simply enjoying the view from our balcony. The room itself was extremely comfortable, with a king-size bed, chairs, and a huge bathroom.

After a very refreshing nights sleep–and a fantastic (included) breakfast at the lodge–we set out the next day to Pana, the only village on the lake with banks/ATM machines, and the launching point for getting a boat to villages on the south side of the lake, including Santiago, our planned destination for the day.

We quickly learned the routine of flagging down the public lancha from the Lodge’s dock, grabbing whatever seat could be found (which on occasion meant squatting on a gas can or perching on the edge of the boat, holding on for dear life), and then paying the driver when you got off. We had been advised not to be talked into paying more than the official rate of 10 Quetzales each (though we did see locals paying half that, a practice we’ve seen often in our travels abroad). Given than 10 Quetzales was about USD$1, it seemed more than fair to us.

The process of finding the boat to Santiago–a different set of docks in Pana–proved to be challenging. Oh, we found the location easily enough, with the calls of “Santiago! SANTIAAAAGO!” being shouted everywhere. However, there are many touts offering to guide you down to the “best boat” or the “public boat” that only they can point you to. The further from the docks you are, the more likely these chaps have nothing to do with the boats, attempting to get you to give them money on the spot to secure a seat, when in fact, all of the public lanchas work the very same way: you take your seat, and pay the driver (or in some cases, his helper) as you exit at your destination.

We eventually noticed that most of the men associated with the public boats wore shirts with an insignia. Even so, in one case someone tried to get us to pay as we boarded. Don’t be fooled–usually the person who asks for your money at the start will remain on land and will not be there at the other end  of the trip when you get off, where the captain will be looking to get paid. Stand your ground–we did–and say you will pay when you arrive at your destination. Also, ensure you confirm the fee with the captain up front. The Pana to Santiago trip is a higher price, as it’s a different route, but still only 20Q (about $2) each.

Once we figured out the boat, all was well. After a 45-minute ride we disembarked in Santiago, one of the larger villages on the Lake and populated primarily by indigenous Mayans. There was a large market there, which we explored quite a bit. There was a cathedral that we intended to see the inside of, but we encountered a funeral procession instead. Certainly not wanting to disturb that ceremony, we contented ourselves with observing a local ritual from across the square.

We found a place to have some delicious tacos – we paid 20Q total for a full plate each, and caught the public lancha back to Pana, where, as it was still early and beautiful out, we found a lakeside restaurant to enjoy a glass of wine and do a little people watching before catching the other lancha back to the lodge. 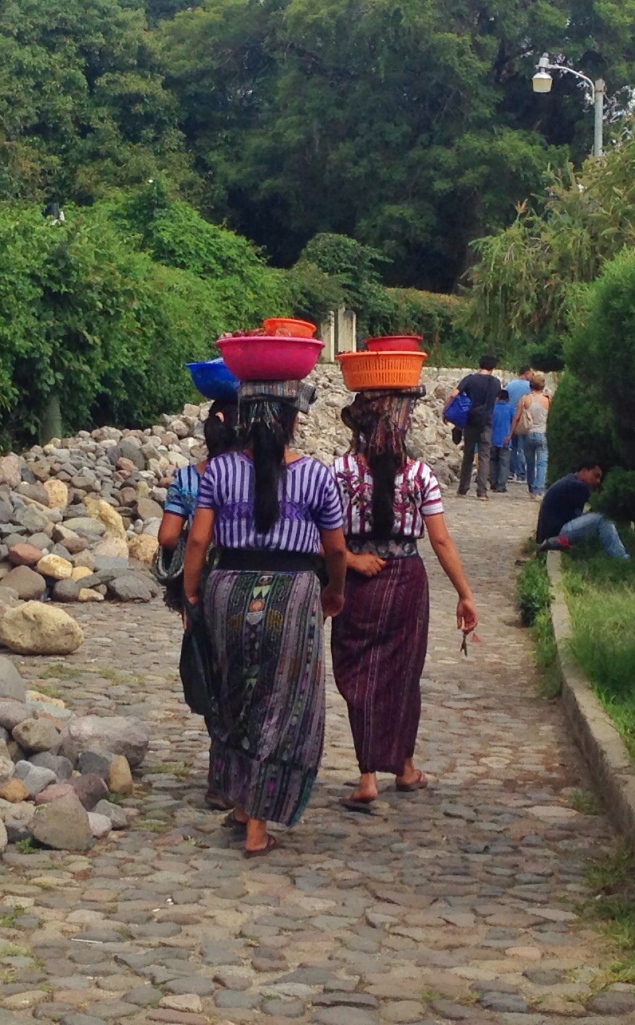 Our anniversary fell in the middle of our stay on the lake, so we planned a relaxing day in and around the lodge that day. We started out before lunch to walk to Santa Cruz, which we were told could be reached in about 15 minutes via a path along the lake. While there was indeed a “path” of sorts, it was really more of a mish-mash of both planned and unplanned walkways along the water. We rather felt like we were in a video game as we crossed bridges created from 2x4s, paths made of gravel and chicken wire, followed dirt tracks up into the trees, then down again on makeshift staircases fashioned from rice bags filled with earth dug into the slope of the hill.

As we got closer to Santa Cruz we noticed a few more small lodgings and some tourists sunning themselves on docks. It was a very quiet, sleepy village atmosphere. The main dock itself was a bit more animated with tuk-tuk drivers offering rides up the mountain to the village proper. Seeking a good walk, we set off up the (quite steep) mountain road on foot, soon realizing that we perhaps should have hired a tuk-tuk. Although it was probably only about a mile, it was roughly a 45 degree incline the entire way (or felt so), but were rewarded with these wonderful views each time we took a short water break.

Our destination was a small comedor, Café Sabor Cruceno run by the Amigos de Santa Cruz Foundation, which provides culinary and other vocational programs in the village. We had read reviews that praised the food quite highly, and we weren’t steered wrong. Our lunch of pepián with freshly made tortillas was one of the best Guatemalan meals we had the whole trip, and watching the girls in the kitchen making everything with care, as well as walking through the textile workshop where other students were learning to sew, was a real highlight of our stay on the lake.

Other than the vocational school, there is not much to see or do in Santa Cruz, but we enjoyed some time just sitting at the window of the café overlooking the lake before taking the very steep trek back down. This time we decided to catch the public lancha back to our lodge, figuring that the glasses of wine at lunch might make us less than sturdy on the video-game path back.

Massages awaited us for the afternoon, and then a lovely dinner at the lodge capped off a great day.

Chichicastenango, and a lesson

Sunday was market day in Chichicastenango, aka Chichi, so we had arranged with the lodge for transportation – about a 90 minute drive after we crossed to Pana by boat. We had read there were numerous “chicken buses” that you could get in Pana on your own and very inexpensively, but we weren’t up for being quite that adventurous so early in our stay. The fact that we wandered the market in Chichi for a couple of hours, perusing the many different textile vendors and managing not to get lost, was enough.

And so we get to our one big hiccup of the trip, and a learning lesson: we were pickpocketed. The details are mundane enough. Having exhausted our “small cash”, which Rob was keeping in a decoy wallet, he had to go into the deep storage security pouch to get a 100 Quetzal note for some earrings I was bargaining over. Rather than put the pouch back inside his shirt, he tucked it into a pocket of his backpack.

We discovered the loss on the drive back. Making our way back to the meeting point for our ride home, pressing through the crush of locals shopping, we didn’t even think about what wandering hands might find their way to the backpack, unseen in the crowd. This was a natural situation for this type of event, and one to which we should have been more alert. The market draws thousands of locals every Sunday, and a few tourists but not many, so we were easily spotted in a crowd.

After 16 years of traveling together, and almost as many countries under our belt, this was the first time we have ever lost money. Yes, those were the most expensive earrings I’ve ever bought–we lost about USD$100 in total–but it was also a very valuable reminder to always, always, keep your main cash and other valuables safe & inaccessible.

Last full day, a hike and one last visit to Pana

For our final day on the lake, we wanted to take advantage of one of the lodge’s great amenities, its private, 100-acre nature preserve. It is reached via a steep staircase right out the back door and you can choose one of several switchback trails leading up the mountain to spectacular views. We chose the “easy” path, and good thing too as it was at least a 45-minute, very strenuous hike over some terrain that were were very happy to have packed good sturdy walking boots for. (It didn’t help that it had rained quite a bit the previous day, so the trails were probably much more slippery than they might be otherwise.) 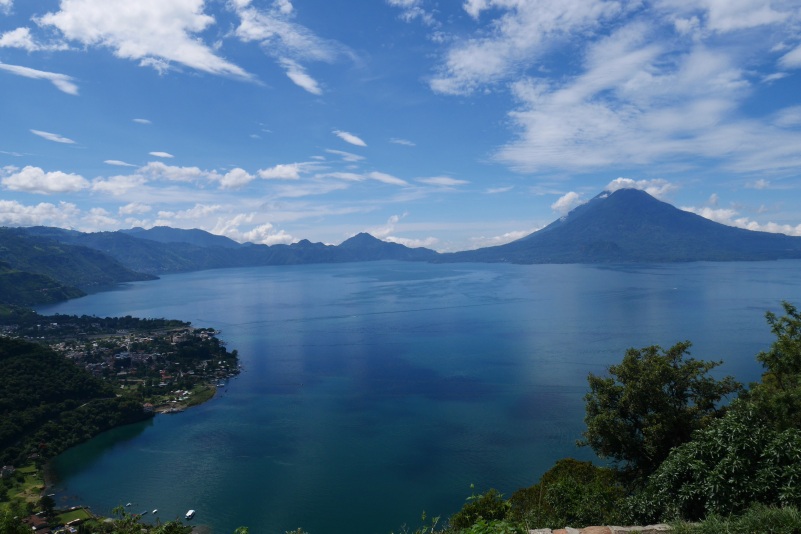 In any case, we made it to the pavillion with the hammocks, and enjoyed a breathtaking view of nearly the entire lake, while we rested and swung in the breeze.

That afternoon we caught the public lancha to Pana, to both restock on cash at the ATM and just walk around a bit. A late lunch overlooking the lake as a storm threatened made for some atmospheric scenery. We caught the boat back in time to avoid the really bad weather, when the lake gets churned up — locals call this the Xocomil — and spent a final evening at the lodge, sitting on our balcony wrapped in blankets and enjoying the captivating views. 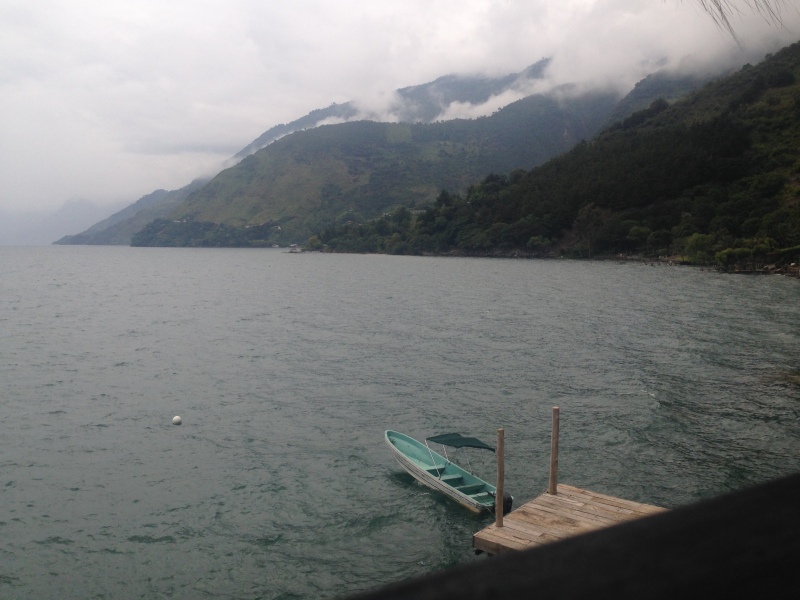 In the morning, we would set off for Antigua.

This post is the second about our trip to Guatemala, which started here in Flores. 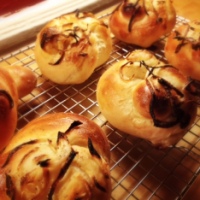